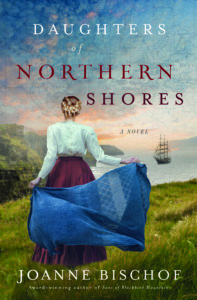 Norgaard understands courage. Orphaned within an Irish workhouse, then widowed at just nineteen, she voyaged to America where she was wooed and wed by Thor Norgaard, a Deaf man in rural Appalachia. That the Lord saw her along the winding journey and that Aven now carries Thor’s child are blessings beyond measure. Yet while Thor holds her heart, it is his younger brother and rival who haunts her memories. Haakon—whose selfish choices shattered her trust in him.

Having fled the Norgaard orchard after trying to take Aven as his own, Haakon sails on the North Atlantic ice trade, where his soul is plagued with regrets that distance cannot heal. Not even the beautiful Norwegian woman he’s pursued can ease the torment. When the winds bear him home after four years away, Haakon finds the family on the brink of tragedy. A decades-old feud with the neighboring farm has wrenched them into the fiercest confrontation on Blackbird Mountain since the Civil War. Haakon’s cunning and strength hold the power to seal many fates, including Thor’s—which is already imperiled due to a grave illness brought to him at the first prick of warfare.

Now Haakon faces the hardest choice of his life. One that shapes a battlefield where pride must be broken enough to be restored, and where a prodigal son may finally know the healing peace of surrender and the boundless gift of forgiveness. And when it comes to the woman he left behind in Norway, he just might discover that while his heart belongs to a daughter of the north, she’s been awaiting him on shores more distant than the land he’s fighting for.

How different lives would be if only a few things had taken a different course. But reality deals with the choices we make—good and bad. After the pieces of bad decisions fall into place, God gives us the ability to forgive and accept the circumstances and consequences. At times it is more difficult to forgive ourselves than to forgive others. Daughters of Northern Shores offers opportunities to forgive, regain trust, and right some wrongs. The characters hope lives are changed before tragedy strikes again.

I feel the pain of the brothers in these pages, torn apart by past decisions. The novel makes me wonder if there is a rift too wide to restore. These men and women face two choices—to forgive or to hold to the past, prolonging and widening the mistrust. What would I do? Is it too hard? Then, God reminds me how big He is.

Joanne Bischof is an ACFW Carol Award and ECPA Christy Award-winning author. She writes deeply layered fiction that tugs at the heartstrings. She was honored to receive the San Diego Christian Writers Guild Novel of the Year Award in 2014 and in 2015 was named Author of the Year by the Mount Hermon conference. Joanne’s 2016 novel, The Lady and the Lionheart, received an extraordinary 5 Star TOP PICK! from RT Book Reviews, among other critical acclaim. She lives in the mountains of Southern California with her three children. Visit her online at JoanneBischof.com; Facebook: Author, JoanneBischof; Instagram: @JoanneBischof.

One of the questions I receive most often is “How do you get it all done?” As a single, homeschooling mom, I’ve long-since learned that there would be easier ways to have a day job than being an author, but God has been gracious in providing abundantly in so many areas. Here are four that I am most thankful for as I look back over the last few years, including this season of writing Sons of Blackbird Mountain and Daughters of Northern Shores.

Now, most authors would agree that “togetherness” isn’t exactly conducive to quality writing time – especially when kids are involved! And while I do need quiet focus to be able to work through a scene or chapter, what I’ve been thankful for is the chance to share story and research discoveries with my children. It’s created more unity around the stories. Instead of needing to usher the kids away, isolating them from the novels I’m writing, I’m able to invite them into them. For the Blackbird Mountain series, I walked them through the Pinterest boards, showing them the different characters. Then we did a history unit on Vikings since that’s the Norgaard Family’s background. We had a blast and it helped make “the story that Mom was working on”, something that they were more aware of and interested in. For my current work-in-progress, we just recently finished an all new history unit including visits to a few local museums and stories that the kids wrote on their own!

I used to want to write, write, write all the time. And often, that’s what I did! Well, I still would love to write as often as I can, but God has been teaching me something oh-so-important: patience. As part of this, I set aside certain parts of the week for writing office hours. These slots of writing time typically occur on Tuesday evenings, and include a few additional 1 ½ hours slots during the week, once homeschooling is done. In this manner, I am able to carve out some quiet writing time while still making sure the kids are having a great and productive day. But for any writer or working mom, we can agree . . . that’s not a lot of time when added up! In God’s wonderful provision, though, He seems to extend much richness to those little snatches of time. They might not be many, but they are mighty! It’s been a prayer of mine for several years now, that by keeping my writing below these other priorities, that God would help me fill in the cracks of time and energy—and He has been so faithful to supply. I still have my moments when I feel frazzled,  especially when deadlines are near, and that’s why I am thankful for this next lesson that God has been teaching me . . .

The thing about living with a writer, is that you often find them staring at a computer screen. That doesn’t look all that productive, does it? But what we’re doing on the other side of that screen is weaving a story-world of plot, characters, purpose, and heart. Typing words onto the page that we hope will touch lives, digging through old articles for research, or jotting down messy plotting notes that we pray will somehow amount to a story one day. By communicating with my kids (like sharing with them about the story and characters) I’m able to help them see what I’m doing and why. And since kids can be rambunctious and full of life (and questions, and needs for snacking, and ideas, and messes . . . *wink*) and since this writer works well with quiet, I have a little chalkboard that I hang on my doorknob when it’s one of my “office hour” slots. I jot down my start time and end time for that 1 ½ hour block, add a heart or smiley face, and often make note of what our next task will be like preparing a meal or doing an activity together. Then I shut my door and the little sign dangling from the knob outside helps the kids remember what I’m up to. It reminds them that I won’t be tucked away for long, but that I do need to focus for a little while. They’re always allowed to come knocking if a need arises, but for the most part, they’re happy on these afternoons with their own projects. When the hour or so is up, we reconvene and go back about our day, usually slipping into something fun that we do together. By having these slots of time in the week, and by communicating carefully with them in a way they can understand, it helps to bring us all what we need.

There are days when I blow it, and days when I need a lot of grace. Maybe I’ve spilled iced tea on one of the research books (don’t worry, this is a hypothetical example 😉 ) or maybe I didn’t save a scene properly, or just feel stuck and exhausted with a plot thread. These days can certainly tamper with the harmony, which begins with my heart and the need to remember the reason for why I write these stories: for God’s glory. When I begin to lose my calm, or grow frustrated or weary with the challenges afoot, I know it’s time to circle back to what it’s all for. It’s for the readers, it’s for my children, it’s for my joy, and most of all, it’s for God’s glory. By me being harried or stressed, very little of this is being accomplished! God has used the writing process to speak to my heart in ways that have reminded me of what I can surrender, and more and more of the ways that I can look to HIM for guidance. The lessons aren’t always easy, but through each season, and through each book, I have come to see more and more all the ways to be thankful.

For the Love of Literature, August 13

Through the Fire Blogs, August 14

Thank you for stopping by. Leave any comments below.